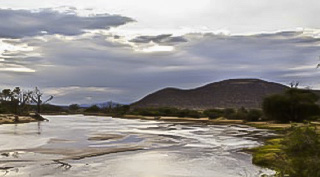 The goal of this unit is to provide a sequence of lessons that will help students understand their connection with their local environment and ultimately help create a partnership with schools in Kenya that are involved in the Mpala Live! project. The lessons in this guide should teach students about the world around them and how it works, and how the presence of people impact other species living there and the overall functioning of these habitats.

These lessons progress through the major themes in Unit 1: The Living World Around Us, beginning with investigations targeting the diversity of animals and plants and the nonliving components of the local habitats, observing how habitats change over time, and the effect of human activity on wildlife. Unit 2: How Animals Work introduces the classification, or grouping, of animals, and the ways in which adaptation helps them function in their environment.

What is biodiversity? Biodiversity is the variety of life. Ecosystem biodiversity refers to the variety of ecosystems, natural communities, and habitats within a particular area or region. Our focus will be on species biodiversity, or the variety of plants and animals in a particular habitat. In essence, it’s the variety of ways that species interact with each other and their environment. The forests of Maine differ from the forests of Colorado by the types of species found in both ecosystems, as well as by the temperature and rainfall. These two seemingly similar ecosystems have a lot of differences that make them both special. The opposite of species diversity is monoculture. The term “monoculture” refers to a situation in which only one species occupies a particular area or region. Examples of man-made monocultures include lawns and farms (such as wheat fields or pumpkin patches). Identifying and understanding the relationships between all life on Earth are some of the greatest challenges in science.

Animal populations may be human, domesticated, or wild. Wildlife includes insects, spiders, birds, reptiles, fish, amphibians, and mammals. Wildlife is all around and varies from microscopic to over 100 feet (30.5 m) in length. All living things go through a series of orderly changes in their life cycles. Humans and wildlife have the same basic needs: air, food, water, and space to grow.

Plants are the backbone of all life on Earth and an essential resource for human well-being. Our everyday life depends on plants. Everything we eat comes directly or indirectly from plants. Many of our prescription drugs come directly from or are derivatives of plants. Plants are the foundation of all habitats. Wildlife depends on plants for food and shelter. Plants regulate the water cycle; they help distribute and purify the planet’s water. They also help move water from the soil to the atmosphere through a process called transpiration. Plants give us oxygen as a byproduct of photosynthesis. They store carbon and have helped keep much of the carbon dioxide produced from the burning of fossil fuels out of the atmosphere.

Energy is essential to all ecosystems—without it life cannot exist. Green plants use energy from the sun and components of the air and soil to make their own food. For this reason they are known as producers. Animals cannot make their own food. They get energy by eating plants and other animals. For this reason, all animals are known as consumers. The organisms that feed on the dead bodies of plants and animals are known as decomposers. Examples of decomposers are mushrooms, molds, worms, and bacteria. Animals that hunt and kill other animals for food are known as predators. Animals that don’t hunt but eat animals that are already dead are known as scavengers. Each of these roles is important to the welfare of the entire ecosystem. The flow of energy through an ecosystem occurs through species eating and being eaten. These relationships are often expressed as a food chain or food web. Competitive and cooperative relationships in an ecosystem help to maintain a dynamic balance between the organisms and physical resources.

Lesson 1: Animals Around Us

Help students learn about the natural world around them through careful observation, classification, and identification of the animals in their environment.

Lesson 2: Plants Around Us

Help students learn how to identify and classify plants and to understand why plants are important to people and animals.

Help students understand ecosystems and the ways in which plants and animals live and interact with each other and their environment.

Help students learn that all parts of an ecosystem are connected and that when one part is changed, it affects the entire system.