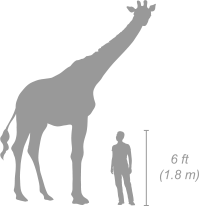 Tracks: Square-toed split hoof with long, curved toes
Scat: Typically flattened at one end and scattered, due to dropping so far to the ground

How fast can a giraffe run?

With their long legs, giraffes can reach speeds of up to 35 miles per hour (56 kph). When running, they swing both legs on one side of their body forward nearly simultaneously.

The social structure of giraffes is very fluid. Herd composition changes constantly, regardless of sex or age, as individuals leave and rejoin groups. The number of giraffes in a herd also varies greatly, reaching as many as 240. Males live a mostly solitary life, though some form bachelor herds.

Giraffes occasionally utter grunts, whistles, snorts, and other noises, particularly when they are under stress.

Giraffes are active day and night. In the early morning and evenings, they spend their time feeding and walking; during the heat of the day, they rest and ruminate. Giraffes are not territorial, though they do have home ranges where they spend most of their time. Male giraffes engage in a behavior called necking, where they use their heavy skulls to bash into one another’s sides. This display, which can be extremely violent, is used to assert dominance.

The overall giraffe population has been declining due to poaching, habitat loss, and expanding human activity. To keep the count from dwindling further, there has been an effort to increase the number of giraffes living in parks, game reserves, and other protected areas.

​Giraffes live throughout most of Africa. There are no giraffes in the northern part of the continent, and the population in West Africa has been in sharp decline since the beginning of the 20th century.

Giraffes are common on the savanna, particularly in regions with acacia, commiphora, and combretum vegetation. They do not live in deserts or rain forests. The reticulated giraffe is one of several species (current thinking suggests four separate species), each of which lives in a particular region and has its own pattern of spots.

Giraffes are very selective browsers, eating only the leaves and buds of trees. Their long tongues, which can be up to 18 inches (45 cm) long, are very agile and help them carefully select and grab their food. Giraffes prefer leaves from various species of acacia trees and have developed thick saliva that helps protect their tongues from the thorns. While giraffes must eat huge quantities of foliage each day, they can survive for a long time without water.

When a male giraffe is ready to mate, he exhibits a behavior called flehmen, rolling back his upper lip to display his teeth. If a female is receptive, the male follows her and blocks any potential challengers. To initiate mating, the male rests his head gently on her backside or pushes her with his ossicones. Females gestate for 15 months, after which they leave the herd and give birth to a single calf. A female giraffe gives birth standing up, with her back legs bent slightly. The calf’s 6.6-foot (2-m) fall serves to break the umbilical cord. A calf learns to stand within 30 minutes of its birth, and remains closely bonded with its mother for the next 14 to 22 months.

Lions are the principle predators of giraffes. The fact that more than half of the current giraffe population is over four years old is indicative of the high predation of calves by lions. During their first year, calves nearly double in height, which helps make them a less likely target for a predator. Once they are grown, they use their powerful legs to fight off lions and other attackers.

Population in Kenya & Beyond

The most recent estimate puts the giraffe population at fewer than 100,000. Population density depends on foliage distribution, though human factors also play a critical role. Recent poaching and conflicts in East Africa, for instance, have reduced numbers of the reticulated giraffe in that region to an estimated 3,000 individuals.